At NUITEQ, as a part of our Corporate Social Responsibility (CSR) program and thus as a way of giving back to the local community, one of the activities that we work with, is offering local youngsters an opportunity to work at NUITEQ during an internship, in Swedish a so called "exjobb" or "praktikplats".

Internships at NUITEQ can range from 1 or 2 days, to a week, multiple weeks or even months.

At the same time, internships are a great opportunity for companies, to get young people with bright new ideas and ways of thinking involved in the business.

In fact, quite a few internships at NUITEQ have let to job offers and resulted in interns becoming employees after a successful internship. A great example is Tobias Klaus, from Germany. He did a successful 8 month internship at NUITEQ and then became employed. Over time he has added tremendous value to the business.

As we are impressed and proud of the recent internship of 14 year old Sem Rutte from the International English School from Skellefteå, we wanted to dedicate a blogpost to his work. 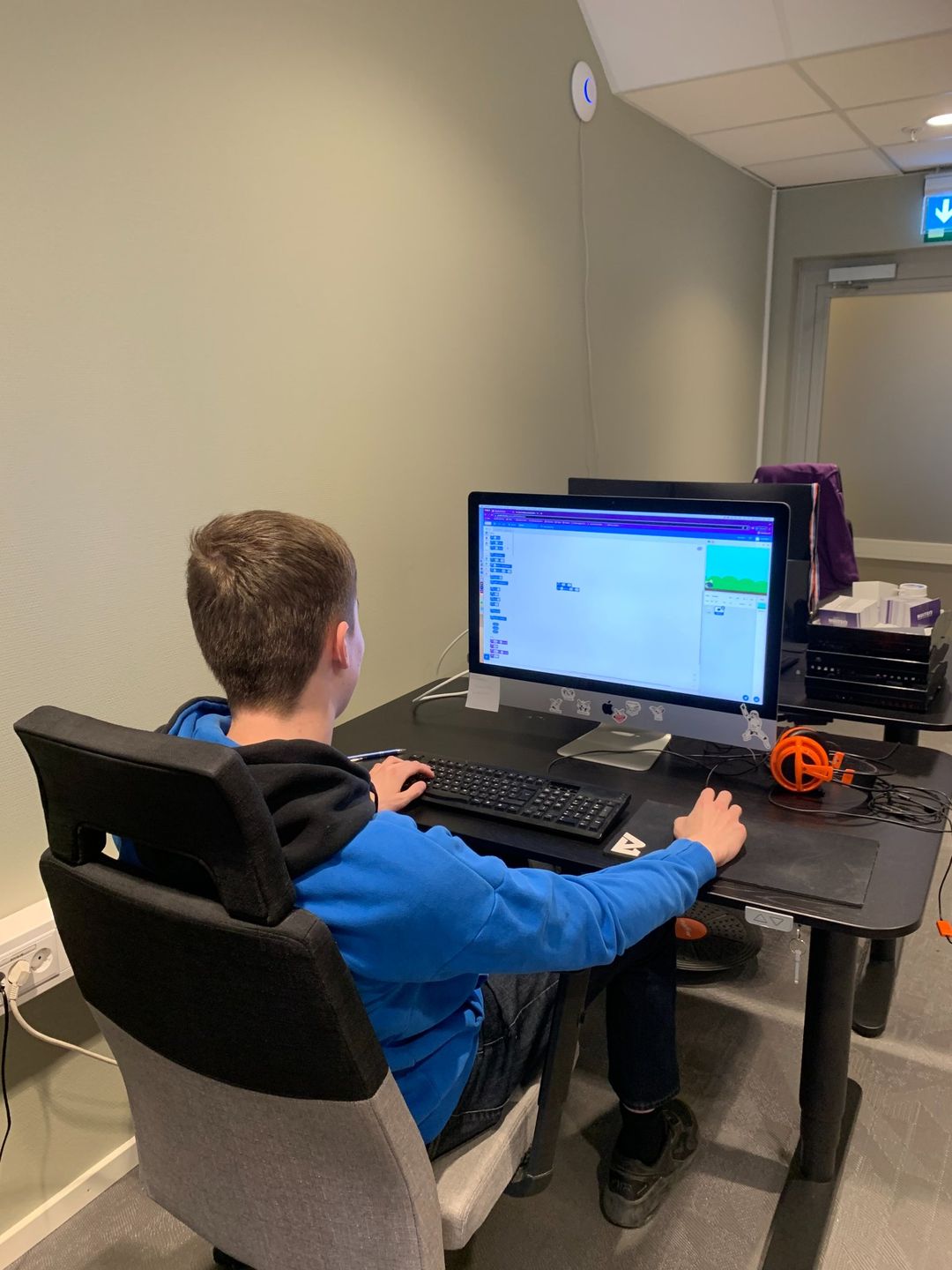 The goals that we set for the week:

- Learn how to use a Mac computer (as Sem was used to working with Windows, we wanted to take him out of his comfort zone and let him experience and learn a new operating system)
- Work in chat program Slack
- Develop a game in Scratch
- Learn how to create and edit a video
- Let him communicate in both English and Swedish
- Learn about different aspects of the NUITEQ business, including meetings with the product team, sales, customer success/customer success and marketing
- Learn more about NUITEQ Snowflake, our educational software suite that makes teaching and learning more fun, engaging and memorable for teachers and students, both in the classroom and remotely as homework

Below you can see the result of the video that Sem created of the game, called Star Collector, that he developed in Scratch.

Below you can read Sems personal report of the week:

This document will be about what I have learned/improved my knowledge about in 1 week at NUITEQ.

My first day at NUITEQ was welcoming and I got to know several people fast. NUITEQ uses mainly mac. I use windows at home so it was a struggle on the first day to know the keyboard shortcuts and some tips & tricks about mac. I had an explained tour around the Campus with Harry and I got to know what they do in each building. I also had a tour through the NUITEQ offices and rooms. Some people that I got introduced to were Mike, Peter, Johan Schager, Johan Larsson, Johan Österberg & Munir.

Harry explained what each person did and what role they had. On the first day all programmer developers have a meeting with Munir about what they have done so far and what they need to finish for the next week. I also had a meeting where I sat next to Harry and listened. The meeting was a more “higher ranked” business to my understanding but it was interesting to listen to. Janni, the customer support manager taught me what they do at customer support and how the company runs. On my first day I started on a project in the programming environment Scratch. I had to follow youtube tutorials. So on Monday I had learned: More about mac, how the campus works, customer support, how the company runs and I got to meet new people.

Tuesday was a busy day. On Tuesdays most of the workers are here and I got to meet; Aron, Ken, Dennis, Myrto, Tomas and Pontus. I had a 20 minutes go through with Jonas Österberg about programming. I took advantage and asked several questions about programming and gymnasium. Later on I had a go through with Myrto about NUITEQ Snowflake. NUITEQ Snowflake is a child-friendly software owned and created by NUITEQ to help teachers and students with education. You can make quizzes, cards, and some lessons that can seem more fun for the children. You can also use it on a touch-TV which makes it even more fun. She taught me how to make a NUITEQ Snowflake lesson, which I would have to create one of my own later on. Pontus had a go through with me about video and graphics which I found very interesting since I edit videos myself. We had lunch on the Campus with Harry which wasn’t really my taste but it still was good food. And I worked on my scratch project.

Wednesday was a more relaxed day. In a 30 minute meeting I learned more about NUITEQ Stage and sales online with Jonas. NUITEQ Stage was a software/program NUITEQ had created for remote meetings. It was a video/call program where you can take notes on a whiteboard without it being deleted. So you could leave the call and the notes would still be there when you rejoined the call. Invites are easy to send with just a link. I also continued working on my Scratch project which had come to life now since I had made a 3d world but there still were some bugs I needed to fix.

Thursday was a nice day. I needed to finish the Scratch game which went very well. Programmers helped me make the ‘Win screen’ and it worked fantastic. The Scratch game was ready to play! The game was in a 3d world, first person. You go around the map, search for stars to collect, while there are also zombies running after you that will take damage from you. You lose if your health is down at 0, and you win if you have collected all 10 stars. You can press M, and a map will pop up where you can see where all zombies and stars are located. I had made a voice/screen video about the game in scratch but the files wouldn’t be able to transfer from mac to windows, which leads us to the next day.

Friday. I made the video in English, and talked more briefly about it. I’ve also edited a video about the project in the software DaVinci resolve 18. I’ve clipped a lot, added music and sped up the gameplay. I’ve had lunch with Dennis and Harry. I’m currently making this Google document and later-on in the day Harry will check up on me, about the video. I’ve given NUITEQ chocolate that they can enjoy today as a thanks from me.

My favorite day at NUITEQ must have been today. I love video editing and it was nice to sit by myself working on a video. I have enjoyed all day and I think Harry has done an amazing job as being my “boss” over this week.

I’ve learned a lot during this week. It has been a very informative week and I have enjoyed every single second. I have had reviews on different sorts of roles at NUITEQ and it made my mind clearer what gymnasium I want to go and study at after year 9.

I didn’t really know what NUITEQ did before other than that they make touchscreen “games”. Now afterwards I know what NUITEQ does. NUITEQ works around the globe finding new partners that want to buy their product. They develop Snowflake modes & Stage suggestions that the buyers want to have. It’s so cool how at NUITEQ you change language so quickly. Sometimes you can speak Swedish in one sentence and then the next sentence you talk in English. NUITEQ is an international company. They have workers from different places and work at different places around the globe. For example Munir, he works for NUITEQ but lives in India. Or for example Dennis, he is from New Zealand but works for NUITEQ here in Skellefteå.

I’ve learned how to make a game from scratch and some basic programming knowledge. I have learned what the workers work with and I have found what I liked the most: Video editing.

This week was probably one of the best weeks that I have had in a long time and I hope my school offers more of these PRAO weeks. (Praktisk arbetslivsorientering = practical job orientation) 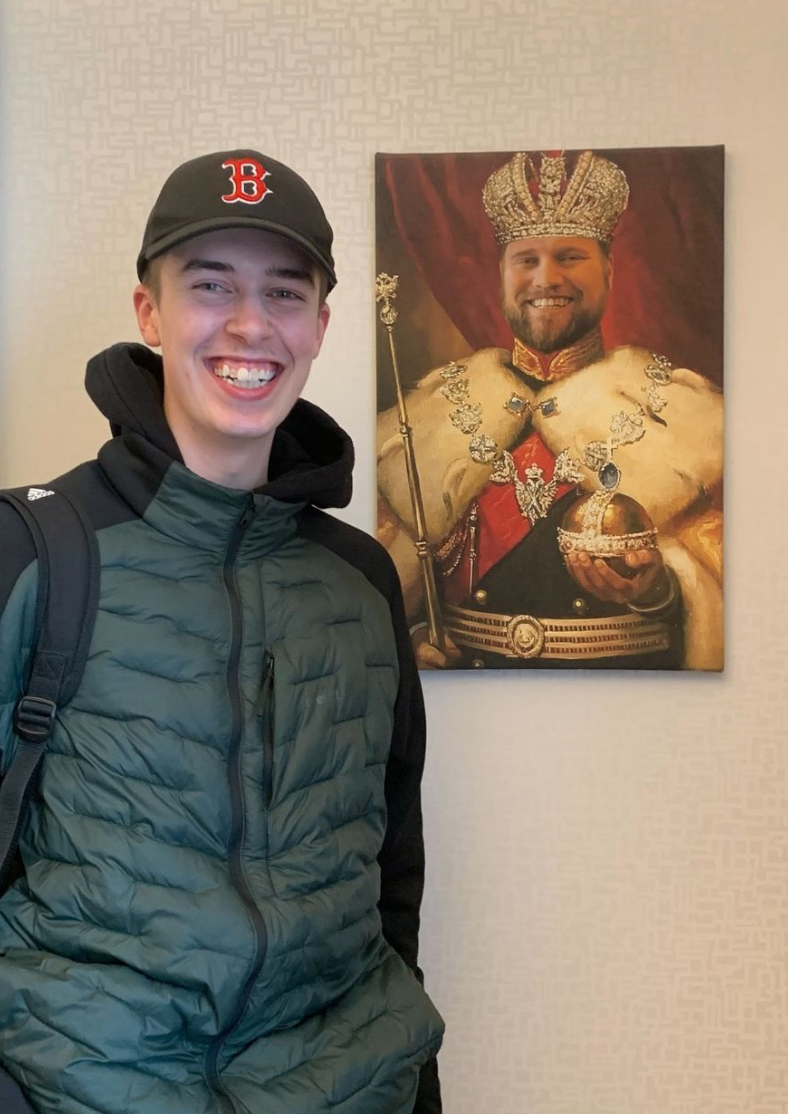 Image: And of course a final picture before leaving the NUITEQ premises

"Obviously we're proud of the fantastic work that Sem has delivered in such a short time span. It is encouraging and inspiring to see the level of creativity of youngsters at that age. My personal goal was to make sure that Sem would get a better picture of what he would and would not like to work with in the future, while having fun at the same time and we have achieved that. We wish Sem all the best for the future and perhaps we might see him again on the work floor. - Harry van der Veen, CEO and co-founder at NUITEQ.

Are you or do you know someone who is interested in an internship at NUITEQ? Please don't hesitate to contact us and we'll promise that we'll offer an as good as possible learning experience.