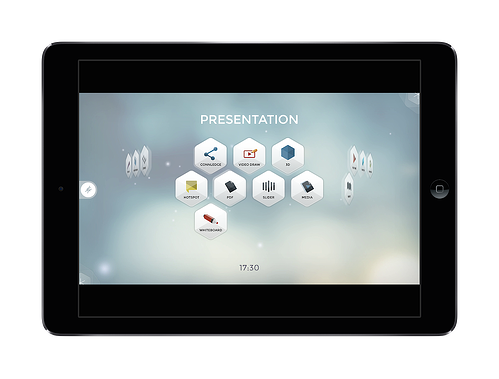 We are pumped, to let you know that we just released version 4.6 of the Business and Entertainment edition of the award-winning multitouch software Snowflake, the 51st release in over 7 years of development, which started back in 2007.

Today we are also launching Snowflake Remote version 2, which is now compatible with Snowflake 4.6. Bring Your Own Device (BYOD) to engage and interact with your target audience in an even more powerful way, leaving a memorable impression. Bring your presentations to the next level and collaborate with your peers on content using your own mobile device. 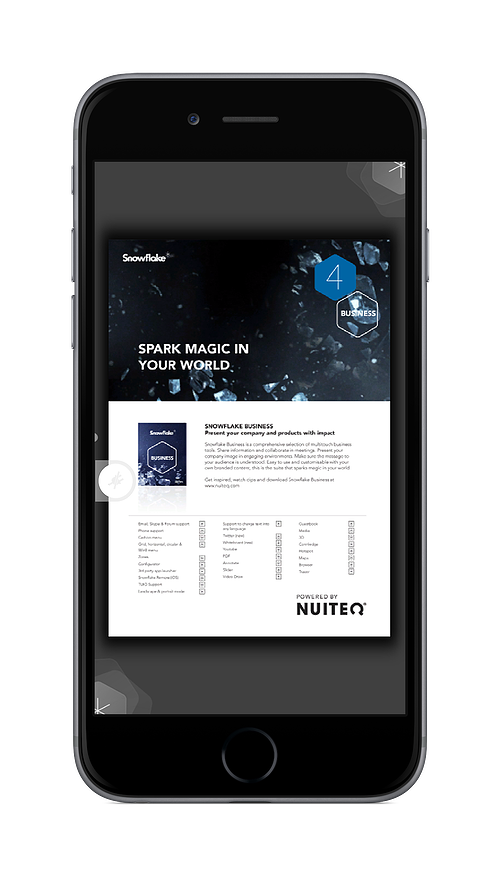 We feel that every new version release of Snowflake is the best thing since sliced bread ;), but this time, we raised the bar even further.

Snowflake Remote 2
Snowflake Remote version 1 has been around since June 2011. This is a tool that allows users to connect their mobile iOS devices, such as their iPad, iPhone and iPod Touch, to Snowflake. Accordingly users can utilise Snowflake Remote as a remote touch input device to control Snowflake. This is amongst others ideal for presentation situations, where a presenter wants to flip through for example her photo and video content in the Slider app or navigate through a corporate brochure in the PDF app, without actually having to touch the main presenter display.

All of the above is also possible with the unpaid version of Snowflake Remote 2.

Via a 100 EUR in-app purchase option in Snowflake Remote 2, you are able get powerful additional functionalities and capabilities such as being able to see a real-time mirror of Snowflake on your iOS device and being able to interact with it. 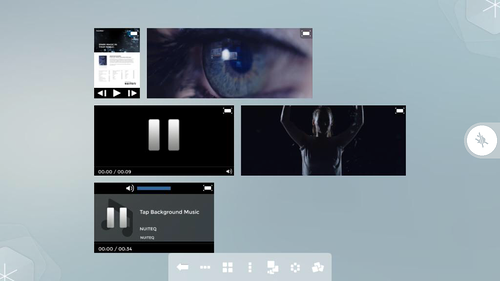 Use for example the Media app, to present video and image content.

This opens up tremendous opportunities to leverage and benefit from multi-user collaboration in situations such as brainstorm sessions, workgroup discussion and other group activities in board rooms, conference rooms and other corporate and educational settings.

The solution is integrated with Bonjour, so if Snowflake and Snowflake Remote are on the same wifi network, Snowflake Remote will automatically search for Snowflake, to see if it is running and giving you the ability to easily connect the two.

This solution works also when a computer that runs Snowflake and Snowflake Remote are on different networks. Then a user can simply connect by filling out the correct IP. Press F6 in Snowflake, to find out, what the correct IP is.

A minimum requirement for Snowflake Remote 2 to work correctly, is that the iOS device runs iOS version 7 or higher.

- Added option in the Configurator to change the corner menu graphics. This is ideal if you want to add your own corporate branding to the interface.

- Added compatibility with Snowflake Remote 2
- Added to support to Whiteboard and Annotate to send annotations to multiple email addresses at once
- Added a feature in the Media app to add files on the fly via a built in file browser
- Added a setting in the Configurator to enable/disable file browsing in the Media app and ability to choose a default start folder
- Added a feature to PDF to open PDF files on the fly via a built in file browser and added a setting in the Configurator to choose the default start folder
- Added option in the Configurator to set a background image and background color for Stage
- Added option in the Configurator to set a background image/video for Hotspot
- Added option in the Configurator to change the corner menu graphics
- Added function to Whiteboard to be able to interact with objects after loading a saved session
- Added more functionalities under the F keys F1-F12
- Added Annotate settings to the Configurator
- Added translation support to the Currency, Stocks, Twitterstream, Weather and MyFeed widgets
- Added physical keyboard support to Whiteboard and Guestbook
- Added settable scrolling speed to Slider
- Improved carbon menu interaction in Zones
- Simplified how to set the background image in Media via the Configurator
- Fixed an interaction bug with the corner menu in Browser and Maps when using Zones or windows mode
- Fixed using the correct keyboard layout for any non English language for Twitter and Warp
- Fixed a freeze with Zones with tile and grid menu in portrait mode
- Fixed high score files in Deflector, Aliens and Warp to be able to use Arabic, Cyrillic, Chinese and other non Western characters
- Minor improvements to Configurator, Aliens, Airhockey, Annotate, Guestbook, Bullseye, Bugs, Browser, Connledge, Curling, Cards, Couronne, Draw, Deflector, Fussball, Guestbook, Zong, Hotspot, Youtube, Maps, Media, Memory, Pool, Pong, Puzzle, Pinball, Photobooth, Slots, Stage, Slider, Snowdoku, Runway, Quiz, FX, Untangle, Zones, Froggy, PDF, Twitter, Videodraw, Warp, Wong, Whiteboard, Labyrinth, translations, all Widgets, evaluation version
- General improvements and fixes

Find the long list of all improvements in over 7 years of Snowflake history in the change logs / release notes here.